story and photos BY MATTHEW GREEN

Armed with little more than some piping, a few fittings, and a bit of creative plumbing knowledge, Oakland resident Laura Allen built a home plumbing system that bucks the sewer by reusing the water from her sinks, showers, and clothes washer to bucket flush the toilets and irrigate the deep-rooted plants and trees in her lush backyard garden. Her five-member household, she says, uses about 100 gallons of water a day, almost 80 percent less than an average East Bay household of the same size.

But until very recently, Allen’s plumbing system was actually illegal in perennially drought-stricken California—a clear violation of strict guidelines spelled out in the state’s plumbing code. Gray water, which is defined as all the reusable water generated by homes—with the exception of toilet outflow—comprises 50 to 80 percent of residential wastewater.

Even though California was first in the country to draft official guidelines for graywater systems, inspiring other thirsty states to follow suit, the code has long been criticized for being outdated and unnecessarily strict in terms of burial depths and other physical requirements addressing public health concerns. For years, graywater advocates have lobbied officials in Sacramento to change the code, arguing that the guidelines and permitting requirements were suited for industrial systems only, and made it far too expensive and complicated for most homeowners to install their own small systems. This in turn has resulted in millions of gallons down the drain each year that could have been reused. Even a number of officials from local parched water agencies like the East Bay Municipal Utility District, which consistently scrambles to meet demand, and last summer ordered mandatory water rationing, have long questioned the code’s validity.

For years, Allen, a 33-year-old elementary school teacher, took a very direct approach in her opposition to the state’s strict plumbing requirements, devoting much of her free time to spreading the graywater gospel by teaching do-it-yourself installation workshops to local residents.

A decade ago she co-founded the Greywater Guerrillas, a volunteer group of Bay Area plumbing-thumbed activists, with the goal of advising homeowners on water reuse, and helping to install simple clandestine systems that cost as little as $200 and take a day or two to set up. In contrast, a far more complex graywater system compliant with old code guidelines could cost thousands of dollars, and, with the permitting process, would take years to install. Allen has long argued that homespun models like those her group advocates—some 2,000 of which exist in the Bay Area alone, by her estimates—are just as effective as more-complex systems in conserving thousands of gallons annually, and posing no health risks. In the U.S. there have been no known cases of illness caused by gray water.

“We talk of water scarcity when we actually have a lot of water that we’re just dumping in the bay,” she says.

Good for irrigating ornamental plants, gray water is also fine to use for edibles, as long as the water hits the roots, not the actual edible portion of the plant. Fruit trees, vines, kiwi plants, and bushes are all prime targets, says Allen. Irrigating veggie beds with gray water, she adds, is a bit tougher, but still possible with a system that’s aimed directly at the roots. Gray water also can provide plants with healthy doses of nutrients—mainly nitrogen from detergents—that serve as good fertilizer.

Many of the potential bacterial health issues can be easily abated, insists Allen, by setting up a system that goes immediately into the ground, is deep enough to never surface, and evenly irrigates either non-edible plants or plants that produce fruit far above the ground. It’s also important, she adds, to use eco-friendly shampoos and soaps and to never pour bleach or other highly toxic chemicals down the drain.

“When you shower, your plants are getting watered,” she said. “These are systems that are really simple. There are no tanks and pumps and this and that. Simple systems are cheaper and usually work better. It’s important to look at low tech.”

In the wake of recent legislation calling for a revised code, coupled with Governor Arnold Schwarzenegger’s statewide drought proclamation in June, California followed Arizona, New Mexico, and a number of other arid states in adopting new graywater standards that significantly loosen the guidelines for installing simple home systems. Under the new code, homeowners installing graywater systems attached to a single fixture (like a shower) have to follow guidelines but don’t need a permit. Unlike the Southwestern states, however, anything that handles more than 250 gallons per day still requires a permit, as do systems that contain gray water from multiple sources. This still allows homeowners to use a large portion of their gray water without a permit.

And with that recent turn of events, Allen and her group of suddenly legitimate plumbers came to the harsh realization that they were guerrillas no more.

“I was a little bit (sad),” says Allen, whose group has changed its name to Greywater Action—For a Sustainable Water Culture. “But it’s been ten years and it’s time to grow. I mean, we’ll always be guerrillas, but we’ll also be something else.”

As explained on their website, the name change decision came about as members of the group were actually beginning to work more closely with the very government agencies and regulators that they had heretofore thwarted. The moniker switch also resulted from the generally tranquil group’s recent collaboration and fiscal sponsorship with A Single Drop, an international clean water organization that works in a number of developing countries where guerrilla struggles for water rights have, at times, turned violent.

Despite its causing the group to relinquish their revolutionary identity, Allen says the new code is a welcome change. “I think it’s great. It’s a huge improvement,” she notes. “It makes it so normal people can use gray water appropriately and it lowers costs. It could have been better, but it’s really, really good, a night-and-day improvement.”

Allen says excitement and demand for her group’s training services have risen significantly. Greywater Action is now offering a $600, five-day training course that teaches people how to be installers and gives longtime volunteer instructors a chance to get paid for their wisdom. The first course, in October, filled up instantly.

Part of a larger movement centered in arid regions of the west, Greywater Action opposes new dam development, and encourages using gray water, lawfully or not, as a way of being responsible about water use while respecting the ecological limits of a region. Allen is a co-editor of Dam Nation: Dispatches from the Water Underground, a published history of water politics and do-it-yourself guide/manifesto for the fringe conservation movement, which stresses direct action and individual responsibility in place of mainstream environmental activism. She got involved in the cause 10 years ago, upset by the amount of water her presumably eco-conscious house was using.

After attending two sessions of a plumbing class at Laney College, Allen headed down to the basement of her then slumlord rental house, armed with little more than a saw and a flashlight. Lacking much of solid plan, she and a co-conspirator found the shower drainpipe, severed it, and promptly wrote to their housemates: “Please don’t use the shower today, it temporarily drains into the basement.” After much trial and error, and what turned into a few days without shower access, Allen had constructed the first of many graywater systems.

On a warm summer evening, Allen proudly displayed the graywater plumbing in the North Oakland house that she now co-owns. Named House of Appropriate Urban Technology, or HAUT House, it has six separate graywater systems, one for each fixture, including nearly every sink and shower as well as the clothes washer. Toilet water, considered black water, is never supposed to be reused, but for Allen—not surprisingly—the idea of flushing gallons of water down the drain is unacceptable, so she recently set up a composting toilet in one of her bathrooms. In the other bathroom, she disconnected the pipe under the sink, replacing it with a bucket. When the bucket gets full, she pours the water into the toilet bowl to flush it.

The vegetable garden, shaded by verdant kiwi vines and apricot trees, eagerly receives her house’s second round water supply. There’s not much plumbing to see; most of it’s buried well underground, positioned to soak into the mulch and water the deep-rooted plants.

For Allen, California’s new plumbing code is certainly no panacea for the state’s shrinking water supply. But it is a piece of a bigger picture, she notes, and will hopefully encourage more residents to think about their water use, and to devise creative ways to conserve.

Oakland resident Christina Berte, a licensed plumber for more than 10 years, got involved with Allen’s group fairly recently. A strong proponent of low-tech systems, she was hesitant to install them professionally up until the recent code change, for fear of losing her license.

“I’m coming from a place of being totally indoctrinated,” she says. “This precious thing, clean potable water at our tap, that much of the world wished they had, we use it once and dump it. We need to rethink our whole relationship to water.”

Matthew Green is a Berkeley-based freelance writer and occasional school gardening teacher. In addition to writing for Edible East Bay, he frequently contributes to the East Bay Express and the SF Chronicle. Green currently works for non-profit media group Active Voice, where he is running a nationwide food access and childhood obesity prevention campaign and organizing community screenings of the new documentary Food, Inc. You can reach him at matthewgreen123@gmail.com 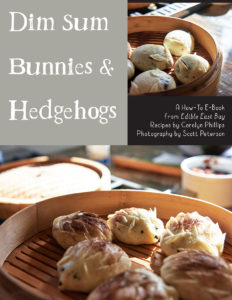 In this troubled time of coping with Covid-19, Edible East Bay
wants to offer helpful information and some spring-season cheer.

Would you like to receive our new e-book with
instructions for making Chinese-style steamed buns
in the shapes of rabbits and hedgehogs?

Enter your address here and we’ll get it hopping your way!