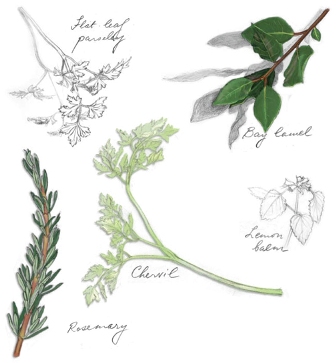 Most home cooks would probably say they know how to use herbs. Chop basil and toss it with tomatoes. Mince rosemary and rub it on a leg of lamb. Gather thyme into a bundle to make a basting brush for roasted meats.

But when I see the heaps of fresh cut and potted herbs at the farmers market, or the array of dried herbs for sale at my local grocer, I often hear myself asking, “Who uses all of those, and what do they use them for?” Then I think, “Why am I asking myself? There are some real pros here in the community, why not ask them?”

I put the question to Tanya Holland, the chef and owner of Oakland’s well-regarded Brown Sugar Kitchen, learning first off that she puts fresh thyme leaves in salsa. Thyme isn’t a rare sight in household kitchens, but I thought about how I last used the woody herb, tucking it into a pot at the beginning of a long cooking cycle. I imagined a hint of that pungent greenness, uncooked and vibrant, in my salsa, and began to see how Holland’s seemingly straightforward food achieves that novel undercurrent that resonates with so many people.

Holland’s understanding of herbs started at home, where her family cooked traditional Southern food but embraced other cuisines with zeal. “I got exposed to dill, cilantro, and basil at an early age.” Chervil, a relative of parsley more common in French cuisine than soul food, is one of Holland’s favorite herbs, and she suggests that getting to know unfamiliar herbs can be as simple as, for instance, exchanging some of the parsley in a dish for chervil. “That will give it a delicate anise flavor,” she says. She describes her revelation about pesto—it can be made with a whole range of different herbs and nuts, not just basil and pine nuts—as an example of this kind of experimentation.

“I think a lot of people don’t want to commit to a large amount of herbs,” she says, “but preserving them doesn’t really take much time. Blanch your basil leaves, purée them into oil, and you can add that oil as a flavor in lots of dishes. And you can do the same thing with parsley, chives, and other herbs.”

After Holland and I chatted, I began to eye my herbs anew. Could I infuse a corn custard with dill? I switched from spice-based rubs for cooked meat to herb-based rubs, trying dried herbs and fresh alike and enjoying the way they brightened heavy dishes. I imagined infusing homemade white wine vinegar not just with tarragon, but with tarragon and thyme, letting tarragon’s anise character and thyme’s pungent green notes mingle. I found myself putting pesto-based dishes into my weekly meal plan after a year’s hiatus and pondering what, besides basil, I might add to them. Would chives be noticeable in the mix? What about a bit of rosemary, chopped very fine? Oregano? I thanked Holland, in my mind, for this inspiration and then decided to pay a visit to June Taylor.

Like Holland, Taylor is attuned to the mystical ways that flavors can be re-imagined. Unlike Holland, her business is about bottling and preserving those flavors for months. Try one of her herb-infused syrups, for instance, to see the possibilities. The strawberry-lavender syrup tastes of bright strawberries with lavender’s distinct floral aroma weaving in and out. Her Meyer lemon and mint syrup gives a jolt of lemon character and a subtle mint note. They’re great in desserts, mixed in with seltzer water, or, as Taylor suggests, in tea.

A slim, tall woman with a warm voice and a rich British accent, Taylor is best known for her jams and marmalades. They’ve received nationwide coverage from magazines, newspapers, and blogs. Syrups are relatively recent additions, but Taylor is excited about the new possibilities they offer. While visiting the Still Room, her sparely decorated west Berkeley workshop, I tried a number of in-progress herb syrups. The lemon leaf syrup had a heady lemon aroma, with a taste of subtle lemon and a noticeable vegetal character. The mint syrup had a pure flavor with none of the bitter, dull character that mint infusions can get if left too long. The Mediterranean bay had an intense aroma and a peppery, zingy taste. I found myself thinking about how often cooks toss a bay leaf into a stew or soup, but how few would ever consider creating an intense extract of it. This is certainly an innovation.

But Taylor sees herself less as an innovator than as a rescuer of past traditions, a role she has grown into as the years have passed. On trips to her native England, she visits the British Library to study the roots of her work. “I read historic cookbooks, kitchen garden books, and preserving books. I want to know: How did Britain fall in love with sugar? We’re masters of sugar work. We developed an entire cuisine around sugar.”

But she does not simply copy Shakespeare-era recipes for a modern audience: Her studies have attuned her to the possibilities around her, which has in turn inspired her.

“My work is an extension of gardening,” she says. “It’s about being in nature and observing it.” And once you do that, she says, you start seeing the plants around you in new ways.

In particular, many of her unusual uses of herbs come from paying attention to the seasonality of those herbs, something few cooks think about in an age when basil is always available at the store. “I noticed that when my strawberries were ripe, lavender was in full bloom,” she says. So she combined the two to create her strawberry-lavender syrup. Once she started thinking of seasonal pairings, new ideas sprang up. Imagine a mix of strawberry and rose geranium, or blackberry and lemon verbena. “To me, these exotic things are very natural extensions of my work. I look at what comes in at the same time in nature.”

She’s also become more aware of the variety of herbs that she can use, and that in turn drives her to experiment more. “I recently got some myrtle,” she says. “It’s a dry berry, sort of like juniper. It has a sweet pine character. I paired it with Meyer lemon in a marmalade. I want to pick wild fennel and pair it with my Zante grapes. There’s stuff growing wild all around us. Appreciating this is where my craft comes from.”

Part of the problem with finding new ingredients, of course, is sourcing them. Though Taylor makes everything in small batches not much larger than what a home cook would make, infusions in particular require a lot of source material. Some of it Taylor grows: She rattles off a list that includes rose geranium, rosemary, lemon verbena, lemon balm, Provençal lavender, and citrus trees. “My garden is really a work garden,” she says, “but I can’t produce a huge amount.” Other herbs, such as mint, which can overrun a garden quickly, come from friends.

The work she has to do to source ingredients, coupled with her appreciation of the peasant roots of preserving, gives her a strong desire to get the maximum out of the plant parts she uses. “I’m a nose-to-tail chef,” she jokes, borrowing a term from cooks who make an effort to use every part of an animal, “but I have twigs and fruit. As I do more of this work, I learn there are many parts of a plant you can use.” So she hand-squeezes the pectin out of Meyer lemon pulp for her marmalades, candies the citrus peels, and puts the lemon leaves into syrup.

Taylor’s resourcefulness came back to me as I chopped peaches and plums to make dried fruit. I decided to try to make a syrup from the small, almond-like kernels inside the pits of the ripe, juicy fruit. Noyaux (the French name for the apricot kernels), are often used to flavor custards and apricot jam. These didn’t have quite the same aroma, but why not try? I cracked open the pits and let the little kernels slide from their hard cases, gathered up the small handful, and put them in pot of simple syrup.

That’s when I realized how much work Taylor puts into her products. The syrup ended up tasting like nothing other than sugar water. I had, after all, only done one infusion with so-so ingredients: You can only climb so far if you start on such a low rung.

Taylor says, “We still hear at the market, ‘This much for a jar of jam?’ But people need to understand what it takes to be a small producer. What does it take to be a small farmer?”

“When someone buys a jam from me,” she says, “they’re really buying fruit from a small farmer.” As she describes her hunt for ideal fruit, she says “It’s about finding people who grow fruit with integrity: honest farmers.”

“Use fresh herbs,” is one of the first pieces of advice new cooks learn when they want to enliven their dishes. Once that becomes common in your repertoire, where do you go? Holland and Taylor provide some answers; more importantly, they inspire people to realize that herbs have many possibilities. All it requires is the courage to explore.

Derrick Schneider is a freelance food and wine writer. He is also the publisher of the popular blog An Obsession with Food (www.obsessionwithfood.com). He teaches wine appreciation classes through UC Berkeley Extension.

Zina Deretsky is a medical and science illustrator with a passion for plants. She works for the National Science Foundation (www.nsf.gov) illustrating current topics in science for the web.