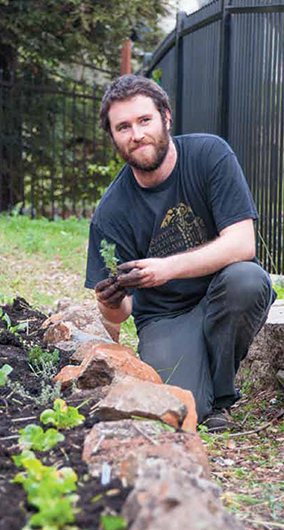 Unlike the vast majority of men released from San Quentin, Kevin Williams left prison with the promise of a steady job. Williams is one of 10 men who have made the transition from San Quentin to employment through Planting Justice, an Oakland nonprofit that is creating green jobs while building fruit and vegetable gardens.

Planting Justice is the brainchild of Haleh Zandi, 29, and Gavin Raders, 30, partners in life and in the organization they’ve nurtured. In 2008, with a shared vision about transforming yards and lawns into sources of nourishing food, the two began a landscaping business called the Backyard Food Project. When their ad on Craigslist brought requests from people who couldn’t afford their services, they went door to door to raise funds. “We always knew we wanted the gardens to be accessible and affordable,” says Zandi. She explains that the business evolved into a nonprofit in 2009. Using income from paying clients plus fund-raising, they’re able to subsidize free gardens for low-income families and community groups.

Williams came to Planting Justice by way of the Insight Garden Program, an unusual project within San Quentin that teaches hands-on gardening, life skills, and meditation to men in the medium-security unit. Founded by organizational consultant and activist Beth Waitkus in 2003, the program centers on a 1,200-square-foot organic flower garden, planted by inmates and volunteers. Zandi and Raders teach classes in the prison garden, and as they’ve gotten to know the men in the program, they have offered a next step—landscaping work, typically three days a week at a living wage of $17.50 per hour.

“This is the most innovative part of what we do,” says Raders. “The men are building beautiful gardens and bringing food to their communities, while also healing themselves from past experiences.”

On a cool day in January, four of these men are on site at the Canal Community Garden in San Rafael, adding decomposed granite into pathways around the raised beds. Although the planter boxes they have built are still empty, by springtime, 80 community members will be growing their own fruits and veggies here. During a break, the men are eager to talk about Planting Justice and the effect it’s had on their lives.

“When I did get out, they were excited to have me, and it made me feel so good,” says Williams. “It motivated me to want to give to their company.  We’re all one family. No one is better than anyone else.” Williams’s motivation has remained high as he’s developed new areas of expertise: building fences, irrigation systems, retaining walls, gray-water systems, and herb spirals. As we talk, he pulls out his phone to show me a photo of a cob oven that the team constructed.

“I learned carpentry skills,” adds Quincy Hilliard, who was hired after his release in 2011. “I didn’t know how to build a trellis or a raised bed. They were very patient with me and taught me a lot. It lets me know that there are some really good people in the world.”

These men work alongside much younger men—high school graduates from the Planting Justice garden program at Fremont High in East Oakland. Zandi and Raders have chosen to work with schools in low-income districts, where both fresh produce and job prospects are hard to come by. “I grew up in the suburbs in a single-parent household,” says Zandi. “I identify with the experience of only being able to afford fast food.” Raders, who is from downtown Los Angeles, is acutely aware that the green sustainability movement has left many behind. “Permaculture often doesn’t reach into low-income communities of color,” he says, “but the knowledge and empowerment it brings is vital in these communities.” In the Fremont High program, students build and maintain vegetable beds, cook from the garden, and learn about social justice movements.

Raders’s staff of 19 currently includes two Fremont High graduates. Of the 10 men who came to Planting Justice through the San Quentin program, five are still on staff and five transitioned after 6 to 12 months to jobs as landscapers, in the food industry, or with other nonprofits.

Kevin Williams (left) and Julius Jones were hired by Planting Justice after taking part in the San Quentin Insight Garden Program. Williams was recently promoted from landscaper to trainer. (Photo by Stacy Ventura)

Harvest at a Homeless Shelter

Last fall, the team planted edible greens and fruit trees at Oakland’s Matilda Cleveland shelter, a center for homeless single-parent families in a neighborhood where fresh produce is scarce. On a late-January afternoon, Raders tends to this garden with help from Janet White, who teaches parenting skills at Matilda Cleveland. Hands caked with dirt, both Raders and White look as if there’s no place they’d rather be. Raders beams as he patiently waters each tiny plant with a garden hose. His goal, he says, is to supply the shelter with a year-round supply of leafy greens—lettuces, arugula, collard greens, kale, and chard. The Planting Justice team has also added a mini food forest, with lemons, pears, apples, plums, and huckleberries.

“This garden represents far more than just nutritious food,” says White. “This is the most dangerous area in Oakland, and there aren’t other places around here where you can have any connection with nature.” For families at the shelter, all experiencing some level of crisis, White believes that time spent in the garden offers a dose of stress relief. Many of the single mothers have histories of domestic violence and other trauma, she says, and they carry a burden of shame and guilt about not being able to provide a place for their children to live. “There’s a feeling of ‘I’m useless, I don’t matter,’” says White, “and this garden signifies that people think you do matter. It gives people a feeling of dignity, that somebody cares and wants to help them nurture their lives as they nurture the garden.” 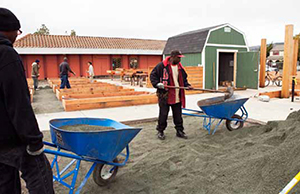 Kevin Williams (left) and Julius Jones were hired by Planting Justice after taking part in the San Quentin Insight Garden Program. Williams was recently promoted from landscaper to trainer. (Photo by Stacy Ventura)

White is planning hands-on gardening activities, smoothie-making, and the addition of a picnic table for shelter residents. The children at Matilda Cleveland have had little exposure to healthy fruits and vegetables and are often averse to trying them, but White is looking to change that. She hopes that when the kids have a chance to pick food right from the garden, bring it to the chef who works at the shelter, and then see it in that night’s dinner, they’ll get excited about trying some kale, spinach, or berries.

Kevin Williams was part of the Planting Justice team that built this garden. “I grew up in Oakland,” he says. “It feels good to give back to the community you’re from.”

The garden at Matilda Cleveland is one of 60 projects that Planting Justice has taken on for no charge—40 for low-income households and 20 for community organizations. Their first community site was at an Iranian-American preschool in Berkeley (the Golestan Center), an auspicious beginning for Zandi, whose family is from Iran. More recently, they organized 25 students at McClymonds High School in West Oakland to transform an asphalt field into an abundant edible garden. Raders and Zandi have developed a business model that supports this level of generosity. The 110 gardens they’ve planted for paying clients subsidize much of their donated work, with additional revenue raised through canvassing and grant writing.

On top of their already full plates, Zandi and Raders have a new venture in the works: they’re part of a team of food justice leaders developing the first sustainable, urban farm eco-village in the East Bay. Located in El Sobrante, the site will include a food forest with 2,000 fruit trees, edible plants and herbs, as well as goats, bees, and chickens.

In all they do, the pair keep the focus on bringing gardens, skills, and opportunity to the communities that need them most. “We want to build as many gardens as we can,” says Raders. “We know that they have not just a physical, nutritional impact, but a deeper emotional and spiritual impact as well. At the same time, we’re reinvesting our profits back into the community. It’s a joy to do.”