How does your garden grow?

Companion planting places two or more plants in close proximity to use their synergies to optimize pest control, pollination, habitat for beneficial creatures, use of space, productivity, and to avoid the use of chemical pesticides, fungicides, and fertilizer. It’s a time-honored concept, practiced in the cottage gardens of England, home gardens of Asia, and ancient fields of Mesoamerica. Jeffery’s handy, easy-to-follow wire-bound book includes a split-page, mix-and-match system with lots of photos, to allow readers to quickly determine which vegetables, fruits, and herbs grow best with one another.

Straight from the Earth: Irresistible Vegan Recipes for Everyone
by Myra Goodman and Marea Goodman
with photographs by Sara Remington
(Chronicle Books, 2014)

Authors are the mother and daughter from the family that raised Earthbound Farm from humble beginnings on a 2.5-acre backyard raspberry farm into one of America’s largest growers of organic produce, a company Michael Pollan recognizes as “industrial organic farming at its best.” Myra is a devoted home cook. Daughter Marea, who lives in Oakland, honed her knife skills and her recipes cooking at her UC Berkeley co-op, where many of the residents were vegan. The book, which will delight vegans and omnivores alike, offers more than 100 plant-based recipes including easy-to-prepare combinations like Quinoa Banana Skillet Bake, Eccentric Caesar Salad (with curry), and Very Chocolaty Chocolate Brownies. 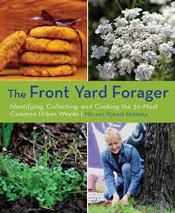 Wherever you find gardens and soil, you’re likely to also find…weeds. But weeds are mostly just wild plants growing where they’re not wanted. And one gal’s weed can be another’s dinner. A nutritious dinner, as it turns out. In this helpful, well-illustrated guide, Seattle-based urban farmer Herrera instructs in identifying, collecting, and cooking up some of those ubiquitous weeds. Put away the chemicals and enjoy returns on your garden labor in the form of Fennel Cookies, Clover Soup, Weed Seed Crackers, Dandelion Flower Fritters, Sweet Briar Rose Hip Nut Bread, and Daylily and Raspberry Sorbet. Recipes for these dishes and more, including provocatively titled Nipplewort Crostini.

This one’s been out for a while, but we’d be remiss if we didn’t include it in a discussion of backyard edible gardening. Carpenter and Rosenthal, two of the East Bay’s urban farmers extraordinaire, have penned an encyclopedic soup-to-nuts-style book filled with urban farming particulars like finding the perfect site, designing a landscape, cultivating crops, and getting them to market. For hands-on instruction, you can find the authors in action at BioFuel Oasis, Urban Adamah, and UC San Francisco. Or stop by Carpenter’s pop-up Ghost Town Farmstand in West Oakland, where she’s currently selling radishes, cilantro, head lettuces, fava beans, arugula, herb bunches, tomato starts, succulents, and various other bibs and bobs (more at ghosttownfarm.wordpress.com).