Beautiful pomegranates are appearing in local markets, alluring with their hard reddish-pink skin and light brown freckling. Cuisines of the Middle East, where the fruit is plentiful, offer many enticing dishes made with the sweet fruit. Produce, herbs, and spices from Middle Eastern regions are similar to what we grow locally here in our blessed Bay Area breadbasket, and these cookbooks will provide lots of inspiration for new and different dishes to create with that bounty.

The James Beard Award–winning chef and co-owner of Philadelphia’s Zahav restaurant celebrates his connections to Israel, describing his personal journey of loss and discovery that led to him to embrace the food of his birthplace. Drawing on influences from the Middle East, North Africa, the Mediterranean, and Eastern Europe, he creates colorful and satisfying dishes like a Pink Lentil Soup with Lamb Meatballs; well-loved standards, including hummus, of course; and party dishes like an elaborate dome of wedding rice or a whole roasted lamb shoulder with pomegranate and chickpeas.

Persiana: Recipes from the Middle East and Beyond
by Sabrina Ghayour
(Interlink Pub Group, 2014)

London-based writer and Middle Eastern food specialist Sabrina Ghayour has created a beautiful cookbook celebrating the food and flavors from the regions near the southern and eastern shores of the Mediterranean Sea. She includes more than 100 recipes that are clear and easy to execute, and richly seasoned with herbs and spices. The book includes a mix of modern and accessible Middle Eastern dishes, such as Lamb and Sour Cherry Meatballs; Chicken, Preserved Lemon and Olive Tagine; Blood Orange and Radicchio Salad; Persian Flatbread; and Spiced Carrot, Pistachio, and Coconut Cake with Rosewater Cream. 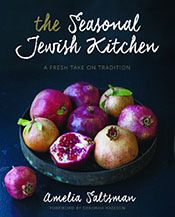 Food writer Amelia Saltsman, author of The Santa Monica Farmers’ Market Cookbook, shares 150 recipes that mix traditional and contemporary Jewish cooking. Guided by the Jewish lunar calendar, Saltsman divides the book into six micro-seasons that highlight the deep connection of Jewish traditions to the year’s natural cycles. Dishes range from her Iraqi grandmother’s Kitchri made from red lentils slow-cooked with rice and garlic, to four-ingredient Golden Borscht with Buttermilk and Fresh Ginger, and vibrant Blood Orange and Olive Oil Polenta Upside-Down Cake. The book includes plenty of vegan dishes, Middle Eastern classics, dishes with more unusual ingredients like buckwheat, and even a how-to on home-cured herring.

Author Rawia Bishara was born into a food-loving Palestinian-Arab family in Nazareth. They pressed oil from olives grown on their land, distilled their own vinegar, sun-dried herbs and fruits, made fresh batches of goat cheese and sweet wine from their vineyards, and jarred jewel-colored jams from local orchards. After moving to New York, Bishara opened Tanoreen, a restaurant to honor her mother and Middle Eastern heritage. The 135 recipes in this book are both traditional and innovative. Highlights include Spice Rubbed Braised Lamb Shank (marinated in ginger and rose buds), Eggplant Napoleon (baba ghanoush layered between crisp eggplant and topped with basil and tomatoes), and Musakhan―flatbread topped with sumac-spiced chicken, slow-cooked onions, and almond slivers piled high, and sliced like a pizza.