The Context of Berkeley’s Food Revolution 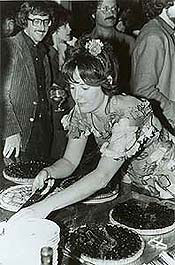 Berkeley’s food revolution began on a police car’s roof in Sproul Plaza on October 1, 1964. Three thousand students spontaneously trapped the cruiser that held fellow student Jack Weinberg after he deliberately violated new and capricious campus rules. The impromptu crowd listened as Mario Savio, a tall, curly-haired student with a worried look, climbed on top of the police car and spoke to the throng.

He didn’t talk about food. He didn’t talk about farmers. He talked about the university’s limits on free speech and the problems with modern education. But a new American cuisine stirred that day, built on the philosophy of Savio and his peers: You could only solve problems by going around the establishment, not by working within it.

The Free Speech Movement pushed Savio into the limelight, but his politics were more evolutionary than many recognized at the time. Berkeley became a magnet for left-wing activists during the early 60s. “Berkeley was where it was at if you wanted trouble,” says David Lance Goines, the activist and graphic designer who created the iconic Chez Panisse artwork and typography. The turbulent student body came to distrust the authority figures who dragged them from civil rights protests and imposed arbitrary rules on campus.

After the Free Speech Movement, students such as Alice Waters protested the government’s stance on Vietnam and civil rights. But the protests became riots when volunteers from the school and community tried to form People’s Park in 1969. Governor Reagan called in the National Guard to stop the peaceful conversion of UC land to a community park. The People’s Park protectors gushed down Telegraph Avenue, pursued by the tromp of boots, the whoosh of tear gas canisters, and the occasional bang of martyr-making gunshots. The town’s residents were outraged. Savio created 3000 activists; Reagan created ten times that many.

When the smell of tear gas dissipated from the paperbacks at Cody’s Books, and Guardsmen marched back to their homes and families, a thrumming energy filled the void. The activists had beat the establishment. The First Amendment protected political student groups on campus. The government was pulling troops from Vietnam. Trees grew in People’s Park. Anything seemed possible.

Savio’s philosophical heirs found their next fight in Frances Moore Lappé’s Diet for a Small Planet, which came out in 1971. The book educated its many readers about the ecological consequences of industrial agriculture. Veterans of Berkeley’s protests had no problem believing that government and agribusiness had short-changed the environment for financial gain.

Local shoppers took up the cause and bucked the mainstream food chain. They sought out organic produce-at that time a fringe movement by maverick farmers. They tried to shorten the distance between the soil and their supper plates, the first stirrings of the Eat Local movement that motivates modern-day foodie philosophers. Then, as now, the just-add-water fertility of California’s Central Valley enabled this food lover’s utopia: It’s easy to find local produce when a sprawling agricultural region sits just over the hills.

“Flavor was our aesthetic,” says Kermit Lynch, who opened a wine shop to fund his musical career and then became an importer whose passion for traditional French wine has a fanatical following throughout the country. The counterculture that settled in Berkeley in the 60s and 70s appreciated beauty and explored it in the local art scene. Film buffs watched art films and classics at the Telegraph Repertory Cinema. Music lovers listened to jazz and blues at Larry Blake’s. Poetry enthusiasts browsed the West Coast’s largest selection at Cody’s Books. It made sense to explore the beauty of food.

The combination of aesthetics and politics meshed well with the Hippie ideals that wafted from San Francisco on a cloud of sweet-smelling smoke. The radicals in Berkeley wanted to change the world: The Hippies wanted to live in a different one. They believed that if you lived your life the way you thought the world should be, the world would join you.

The Hippie mentality appealed to the new population of drifters and dreamers who came to Berkeley to live out an alternative lifestyle. Mario Savio proclaimed victory for free speech in 1964, but America heard “Anything goes in Berkeley.” The town’s population began to self-select: “Nice” people stayed away, “troublemakers” came in droves. Left wing artists replaced the conservatives who dominated the town in the early 60s. Mainstream-defying collectives sprang up everywhere, including the Cheese Board, the successful business that Elizabeth and Sahag Avedisian sold to their employees in 1971. Co-ops, including grocery stores, created an automatic community among the members, who shared a common vision of a better world where they could effect change while running errands.

One of the new immigrants was present-day culinary memoirist and Gourmet Editor-in-Chief Ruth Reichl, at the time “a Gypsy with abundant black curls tossed over [her] shoulders and a multicolored skirt that swept the ground.” She came not as a student but as someone who wanted a life that fit her parameters of happiness. She worked at The Sparrow, a collectively owned restaurant, and prepared meals for a large gaggle of artists and neighbors who dropped in each night. “Berkeley was very bohemian,” she says, “full of people like us.”

Berkeley’s economy made alternate lifestyles possible. Students weren’t rich-dumpster diving appears in Reichl’s Tender at the Bone and Jo Freeman’s At Berkeley in the 60s-but they could make ends meet without a parent’s wallet and the rules that came along with it. David Lance Goines and Alice Waters paid tuition ($75 per semester) and rent and threw fancy dinner parties while he worked halftime at a printing press and she worked part-time as a waitress and a teacher. Reichl and a group of fellow artists bought a 17-room house for $29,000.

Students and those in the flats could make ends meet, but the food scene succeeded because of the town’s moneyed set. Diners packed Narsai David’s eponymous restaurant on Kensington Circle, which offered elegant menus and a wine list that won one of the first three Wine Spectator Grand Awards. Shoppers bought French charcuterie at Victoria Wise’s Pig By the Tail. They flooded into Alice Medrich’s Cocolat and cleared out her desserts.

They didn’t mind that Medrich drew her signs by hand or learned to make desserts just ahead of consumer demand. They supported Chez Panisse even when it had mismatched chairs and an awkward layout.

They understood good food, and they wanted to recapture the taste of France.

France was on the country’s brain. Julia Child’s TV Show The French Chef first aired in 1963 and Richard Olney wrote about the simple French cuisine of the countryside. It seems like every other food lover in Berkeley had traveled to Europe. France then was much like Southeast Asia today: A place to travel cheaply and have a food epiphany around every bend. Country French food retained the connection to the land that American food had lost. If flavor was an aesthetic, France dictated the standards of beauty.

Those who went to France returned with a burning need to bring the food home. Alice Medrich sold truffles and pastries inspired by the ones her French landlady had made for her. Kermit Lynch visited small, traditional wine makers in the countryside and brought back the character-rich bottles that would earn him a national reputation. Steve Sullivan tasted authentic French bread and resolved to make it here, first in the kitchens at Chez Panisse, and then at Acme Bread. Alice Waters had an epiphany as she ate at a restaurant that grew its own vegetables and threw a line into the river when she ordered fish.

Alice Waters, a pretty young woman with a far-off look in her eyes, was the Mario Savio of the food movement. The Berkeley culture shaped her, but she had the energy and vision to spearhead the revolution and rally those around her. “She is a restaurateur in the old tradition,” says wine writer Gerald Asher of his friend. “She knew how to source the best ingredients, and she knew how to get the best from her chefs.” She turned her back on haute cuisine, the established definition of gourmet food, in favor of simpler food that showcased the beauty of good ingredients. Her food supported her political beliefs that agriculture needed to find harmony with the environment. She felt that if she served the kind of food she believed in, the world would find its way to her and change its attitudes. Anything seemed possible.

After Alice Waters, the food revolution’s history slides into a well-worn groove: Chez Panisse flourished in the unique Berkeley environment, fueled by Waters’s passion and a dash of luck. James Beard trumpeted the restaurant’s cause, and Chez Panisse became a destination and an example. Waters’ novel approach to cuisine changed the American restaurant landscape. Stylized French food ceased to be the gold standard, replaced by chefs who worked closely with farmers and proudly listed the growers’ names on menus. Many cooks came through Chez Panisse’s got her religion and spread it throughout the country as they became prominent chefs in their own right. Small cheese producers such as Laura Chenel could succeed because the restaurant’s chefs provided a market. All who ate there learned the lesson well: Great food and great ingredients are two sides of one coin.

Berkeley’s food movement had such a profound influence that modern Americans take its results for granted. Shoppers find European-style bread in their supermarkets without knowing that Steve Sullivan’s crusty loaves inspired the baker. Coffee drinkers order gourmet coffee from Starbucks-for all its commercial ills, the chain’s coffee is generally better than what its customers drank before-without knowing that three friends of Alfred Peet emulated his Berkeley store in Seattle. Dessert lovers swoon over elegant pastries without knowing that the chef’s influences probably link back to Alice Medrich’s top-quality, ingredient-driven desserts. Foodies everywhere shop at farmer’s markets without seeing the young woman who made a national movement out of the belief that you should know who grew your produce.

Mario Savio’s fights had definite endpoints. The battle for your palate is 30 years old and still being fought.

The author would like to thank Sylvan Brackett, who provided invaluable assistance. 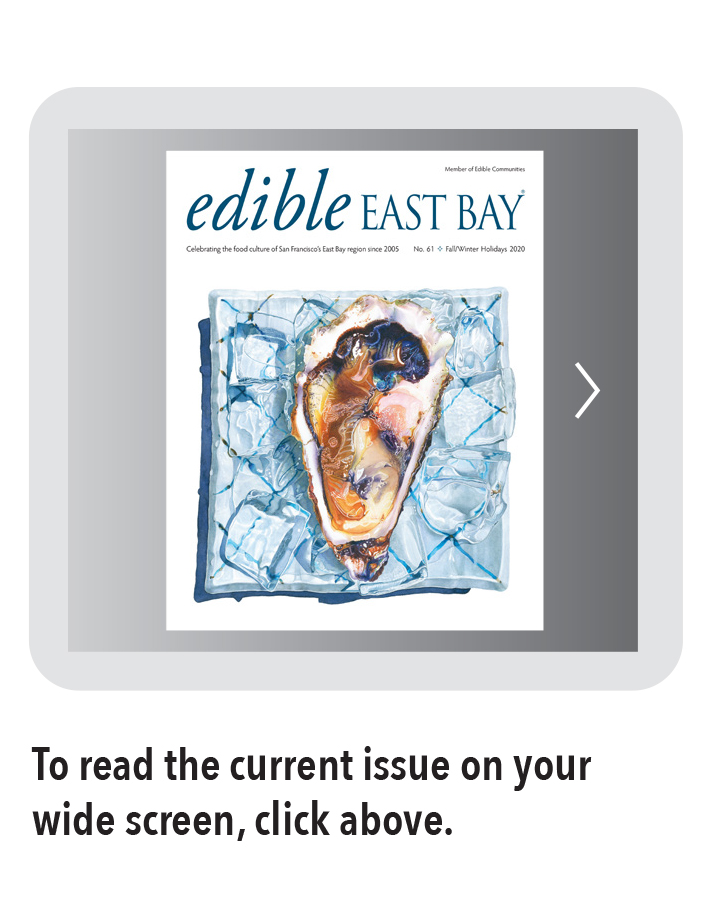 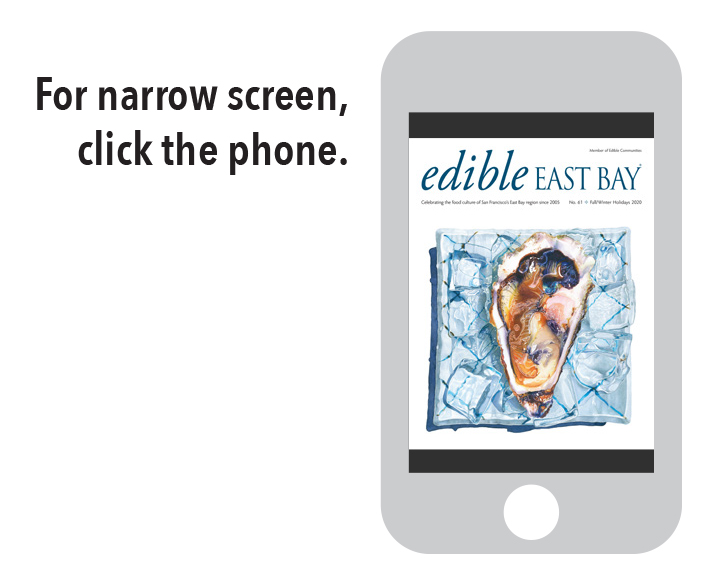