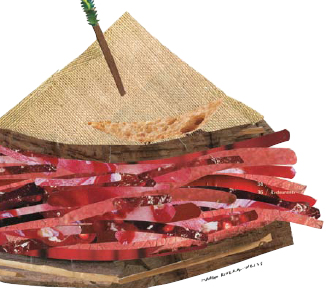 In New York City, where I was born and bred, the Jewish deli has long been an institution as inviolate as any formal religious sanctuary; a place of solace, familiarity, and tradition in a town well known for its furious perpetual modernization.  Throughout most of my life, my mom has worked on 57th Street in Manhattan, which is right around the corner from Carnegie Deli, perhaps the most iconic deli of its breed. For those unfamiliar with Carnegie’s landmark stature, in the storied realm of Jewish culinary tradition, it is the Eiffel Tower, the Colosseum, the Great Wall. And so, several times a year, on days off from elementary or middle school, I would accompany my mom on her lunch break to Carnegie’s long, dark dining room, where weathered waiters balancing giant bowls of borscht as dark as blood waltzed frenetically from table to table. Every setting came equipped with sour green tomatoes and pickles the size of footballs. We’d sit at a small table under an expansive wall of fame covered with autographed photos of once famous movie stars and statesmen I’d never heard of.

And without so much as opening the menu, I’d assertively order “the usual,” which would arrive minutes later: two thin half-slices of Jewish rye holding a pile of pastrami so colossal that I seem to recall it obstructing my view—perhaps the reason I have no recollection of what my mom ever ordered. Even so much as a wilted piece of lettuce would have been an unnecessary distraction from the work of art that towered before me. In retrospect, I have no idea how my 80-pound frame was capable of putting away such a mass of meat, but I savored every bite until the point of near-rupture.

The Jewish deli—the ultimate source of comfort food—has long been a celebrated tradition of sanctioned excess, one that led the late New York Times food columnist Richard Shepard to remark: “I love Jewish food, but when you eat it, 72 hours later you’re hungry again.’’

Yet, such tradition of overabundance has recently prompted a number of forward-thinking deli owners to reexamine not just the portion size, but also where those raw ingredients come from, and how they are produced.

“We didn’t want to sell meat we wouldn’t eat,” said Karen Adelman, co-owner of Saul’s Deli, an East Bay epicenter for traditional Jewish cookery in North Berkeley. “The deli has to be re-imagined. It can’t be hermetically sealed.” She was speaking to a room full of deli aficionados who had gathered at the nearby Jewish Community Center for a special “referendum.”

In a region where the real deal Jewish deli is a rarity, Saul’s has legions of die-hard regulars, patrons who know every item, underscore, and insert in the restaurant’s expansive six-page menu. So if the size, taste, or price of an order as iconic as, say, a corned beef sandwich, were to change, even to the slightest degree, such an alteration would likely be noticed, and perhaps not favorably. Traditionalists often don’t take too kindly to a change in . . . well, tradition. And so, Saul’s came to ask its community how they’d feel about slight menu changes that could include more seasonal dishes, smaller portions, and, in some cases, slightly higher prices that would allow for higher quality, more sustainably raised meats.

“The idea is to get permission from our patrons to have deli cuisine breathe like the seasons,” said Adelman, who sat on a panel with longtime business partner Peter Levitt as well as a lineup of food policy advocates, including author Michael Pollan and urban farmer Willow Rosenthal.

Leavitt took the opportunity to explain his dilemma: “The larger the menu, the more problematic it is to run a restaurant,” he said, noting that Saul’s interest in sourcing locally and buying seasonally often conflicts both with the nature of the meals and with the portion sizes customers demand, as well as with basic price point economics. His dream, he said, is to ultimately shrink the menu. It’s this notion that’s been lost among so many diners, that perhaps you shouldn’t be able to eat everything you want, whenever you want it. That maybe more attention should be paid to what’s in season and produced nearby.

So here we were at a watershed moment. As Adelman addressed the standing-room-only crowd, she revealed that, in fact, this was the first time they’d ever actually publicly discussed the delicate subject of corned beef in relation to questions of sustainability.

A number of years ago, Saul’s began searching for more local and sustainably raised meat and vegetable options.  It came on as they increasingly learned that the meats supplied by many of the most familiar kosher labels were products of the industrial system. This included Hebrew National, which had been bought out by behemoth ConAgra. A kosher designation, they realized, guaranteed nothing about the treatment of the animals, the environment, or of the workers.  Saul’s brisket, steak, sirloin tip, and hamburgers are now made from grass-fed cows raised at Stornetta Ranch in Mendocino. As a result, the deli’s prices for these items have risen marginally, and in some cases, portion sizes are now reduced. The price differential between conventionally raised, corn-fed beef from a huge Midwestern feedlot and its organic grass-fed counterpart produced on a small ranch not more than 150 miles from Berkeley is substantial. A pound of industrially produced pastrami—what I gleefully shoved in my mouth for years—now goes for about $2 wholesale, while a pound of grass fed will run you upwards of $6, according to Leavitt. But, like much of industrially produced agriculture, the cheap price tag on beef hides the real costs.

“It all can be done,” said Michael Pollan, in reference to having more ethical and environmentally sustainable food options on the menu.  “It’s just more expensive. There is a price.” What seems normal in today’s Jewish deli has actually changed tremendously,” he added. “Meat was produced in a very different way fifty years ago . . . Now it takes a lot more time and money to get back to the way it was. There is a trade-off between quality and quantity in everything.”

Because they were unable to find a local beef salami source—and what they had been using was industrially produced— Saul’s decided to take it off the menu. They are now searching for other options, and have even publicly put out calls for suggestions, including signs posted in the restaurant’s lobby and bathroom that read: “Wanted: Beef salami.” Responses have flooded in, “more than we ever dreamed of,” said Adelman.

“Part of Jewish tradition is that traditions change,” said Gil Friend, a sustainable business strategist. “People say that huge sandwiches are tradition. This isn’t tradition. It’s from the 1950s postwar era—a reaction to prosperity and abundance . . . Food is one of the most conservative things in people’s lives. Change is hard but possible.”

In fact, much of traditional Jewish cooking derives from a culture of poverty and food scarcity rooted in Eastern Europe.

“Our main idea is that this food has been a moving target—it’s a Diaspora cuisine,” said Adelman. It’s the same type of comfort dishes, she added, “but with more consideration.”

The standard complementary pickles on the tables are now grown and processed locally from May to October, an additional cost that the restaurant has chosen to absorb. The six-ounce “centerpiece sandwiches” remain the same, but prices have risen slightly where local meat is now being used, and smaller options are also available. One notable menu-item deletion, however, is Dr. Brown’s, which has been replaced by the restaurant’s homemade soda. In terms of menu design, said Adelman, things will rotate in and out a little more, but the overall size of the menu will remain as hefty as the matzoh balls served.

One way to change customers’ ordering patterns, said Pollan, is to offer another appealing way to eat, and that might require restaurateurs to educate their patrons, to tell them the story of how their food was produced.

Adelman noted that there has been little customer backlash to the menu changes at her restaurant. It has even brought in some new customers, she added.

In fact, she says, one of the first emails on the topic she received, and the only angry one, “was from my mother.”

Matthew Green is a Berkeley-based freelance writer and occasional teacher for school gardening programs. In addition to writing for Edible East Bay, he frequently contributes to the East Bay Express and the SF Chronicle. Green currently works for non-profit media group Active Voice, where he is running a nationwide food access and childhood obesity prevention campaign and organizing community screenings of the new documentary Food, Inc. You can reach him at matthewgreen123@gmail.com.

Margo Rivera-Weiss is an artist who lives in Oakland. She makes a full range of food-related art in watercolor and other media. More work can be seen at www.margoriveraweiss.com. 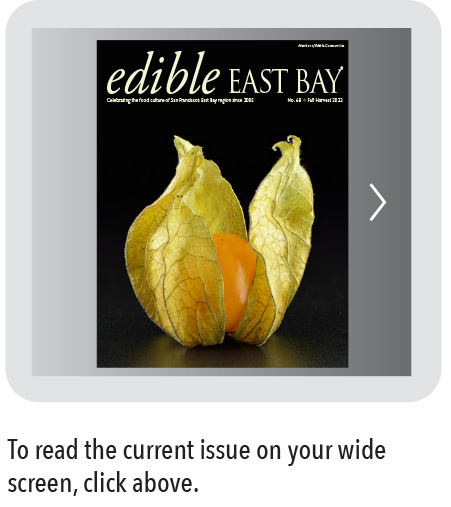 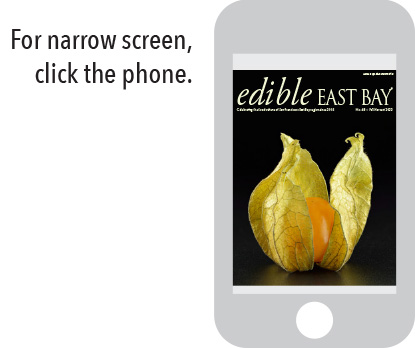 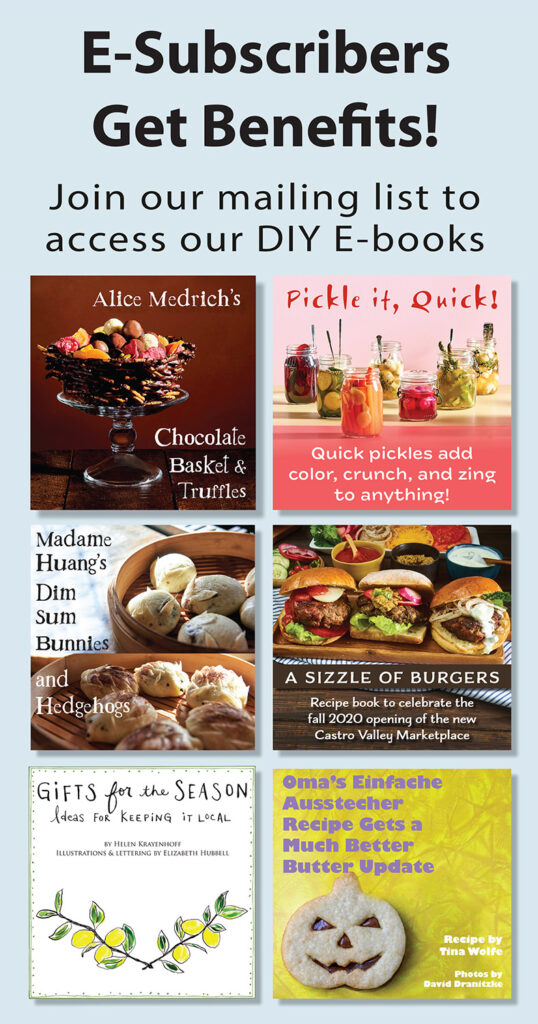